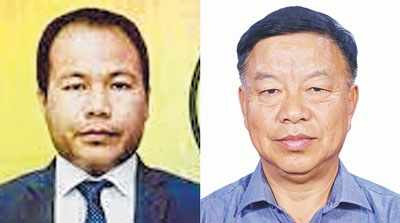 By Our Staff Reporter
IMPHAL, Sep 23 : The High Court of Manipur has declared the election of Lorho S Pfoze as a Member of Parliament from Outer Manipur Parliamentary Constituency for filing false affidavit during the 2019 Parliamentary elections.
Results of the two Parliamentary seats were declared on May 23, 2019 while polling for the Outer Manipur Parliamentary Constituency was held on April 11, 2019.
Justice MV Muralidharan delivered the verdict before the Court today.
Apart from invalidating the election of Lorho S Pfoze of the Naga People's Front (NPF), the High Court declared Houlim Shokhopao Mate alias Benjamin Mate of the BJP, who was declared the first runner up in the election, elected.
Lorho S Pfoze was disqualified on grounds of filing false affidavit pertaining to his assets, failing to disclose vital material information in his affidavit pertaining to his non-agricultural lands and other interests in immovable properties at Kayinu village, Mao in Senapati district thereby rendering his nomination as invalid and void, ruled the Court.
The Court ruled that the total value disclosed by Lorho S Pfoze showing Rs 52,23,704 for self and Rs 2,35,648 for spouse are false and misleading.
It also ruled that Pfoze had kept Column 5 of Para 4 of the affidavit blank as nothing was filled up in the relevant column.
The verdict of the High Court of Manipur was delivered following a complaint filed by Benjamin Mate.
The hearings of the case were conducted on June 8, 2022; June 9, 2022; June 17, 2022; July 9, 2022; July 11, 2022; July 13, 2022; July 22, 2022; July 25, 2022 and July 26, 2022.
After the verdict was kept reserved, it was declared by Justice MV Muralidharan today.
Other than S Pfoze, six others were named as respondents.
Advocate Sundeep Srivastava and Ashem Mohendro Singh appeared for respondent Benjamin Mate while HS Paonam and BR Sharma appeared for the respondents.
Polling for the Outer Manipur Parliamentary Constituency was held on April 11, 2019 while the last date for filing nomination was March 25, 2019.
Altogether 8 candidates had contested from Outer Parliamentary Constituency in the 2019 Parliamentary elections.
Counsel for the petitioner Benjamin Mate said that the nomination filed by Lorho S Pfoze should have been  rejected by the Returning Officer but it was ‘improperly accepted’ thereby allowing him to contest the polls.
In the Lok Sabha election, Lorho S Pfoze of the NPF had secured 3,63,527 votes while Benjamin Mate of the BJP received 2,89,745 votes.
Delivering the ruling the High Court ruled, “The election petition is allowed by declaring the election of the respondent number 1 (Lorho S Pfoze) as Member of 2-Outer Manipur (ST) Parliamentary Constituency to the 17th Lok Sabha, 2019 as null and void.”
The Court also declared that “the petitioner (Benjamin Mate) is duly elected as a Member of 2 Outer Manipur (ST) Parliamentary Constituency.
The petitioner and the respondents were also directed to bear their own cost.