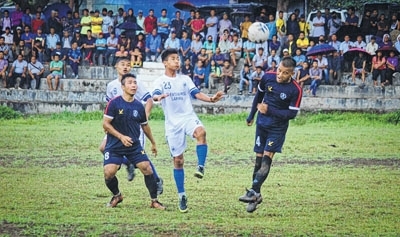 Our Correspondent
KANGPOKPI, Sep 8: Manipur State League team KLASA Keinou edged past TYPOM Maohing 2-1 to open a winning account today in its campaign in the ongoing Len and Sang Trophy 2022 at Brig M Thomas ground, Kangpokpi.
Meanwhile, another MSL team Symropia Football Club from Churachandpur, after winning its first match was held to a 1-1 draw by Kuki Football Academy (Junior) team in a group C encounter in the second match.
The first half of the group A encounter between KLASA Keinou and TYPOM Maohing in the first match ended in a goalless draw.
Keinou's side came back with a better performance in the second half to find an opener through Th Manichand in the 70th minute before A Rajdan added another goal in the 76th minute. Maohing's TYPOM despite all efforts failed to equalize as Letjahao could only pull back a goal in injury time for the Maohing side.
In the second group C encounter match, Symropia Football Club, after having its first in its first match over Manipur Terrier was held to a 1-1 draw by Kuki Football Academy (Junior) team who has another match with Manipur Terrier on September 12.
Symropia's Peter opener in the 43rd minute was equalized by KFA Junior through Lungouhao in the 59th-minute of the game.
Tomorrow, Football Club Gorkha XI Manipur will play in the first match while Taphou Football Club will clash with Sagolband United in the second match.