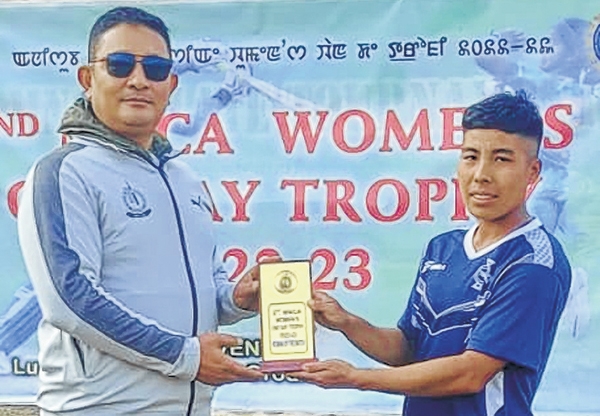 By Our Staff Reporter
IMPHAL, Dec 31 : Runaway league leaders THAU-Thangmeiband rode on centuries from B Seterny Devi, Waikhom Ganga and Ronibala Chanu to demolish FORCE by 424 runs in the penultimate league match of the 2nd MNCA Women's One Day Trophy at Luwangpokpa Cricket Stadium, Luwangsangbam.
THAU won the toss and amassed 475 runs for 0 in allotted 35 overs thanks to Seterny (111 off 83 balls, 11 fours), Ganga (128 off 61 balls, 22 fours) and Ronibala (100 off 63 balls, 13 fours) trio who were unbeaten but had to retire hurt. THAU then rode on Kiranbala Chanu Haorungbam's six wicket haul to dismiss FORCE for 51 runs in 14.4 in the chase.
Milan Chanu Yanglem (44 off 25 balls, 8 fours) and Kiranbala Chanu (9) were unbeaten when THAU wrapped up their innings with a huge total as FORCE bowlers failed to find the breakthrough.
Haorungbam Kiranabala Chanu then produced player of the match performance by removing top three FORCE batters including one on duck to reduce them to 20 for 3 in 5 overs and claimed three more wickets including two ducks to return with best bowling figures of 6 for 16 in 5.4 overs.
Kiranbala's wickets also included FORCE highest run getter Neha whom she caught and bowled for 18 for the 9th wicket.
Monica Devi Ningthoujam also scalped twice both on ducks to help THAU bowl out FORCE for 51 runs.
Kiranbala eventually walked away with the woman of the match trophy.
THAU will play PTRC in the final match on January 2.