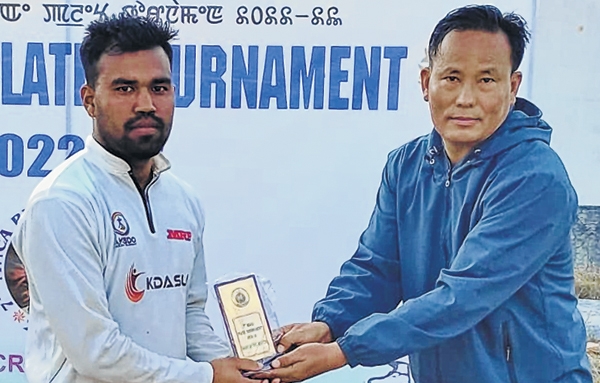 By Our Staff Reporter
IMPHAL, Jan 2 : AKSDO-Khangabok rode on Chinglensana Moirangthem's half century and bowlers to clinch a huge 133-run win over YPHU-Lalambung Makhong in a Group A match of the ongoing 7th MNCA Plate Tournament.
Sent in to bat first, AKSDO managed to post 216 runs for all wickets down in 33.1 overs but proved superior and restricted YPHU to a paltry total of 83 runs as bowlers put in a concerted effort here at Model Hr Secondary School and Oriental College ground.
Chinglensana who started AKSDO innings with Khamba Khundongbam saw his partner caught and bowled out Amar Sandham for 15.
He also saw Winchelly Laishram getting run out for 10 and Jiban Khundrakpam caught and bowled out Moirangthem Thomas before Niketan Maisnam removed Bishorjit Mangang for 12 for the 4th wicket as the scoreboard read 115.
Chinglensana then was caught out for 50 by Birbal Irom off Bishoraj Sharma's 4th delivery in the 19th over.
Despite losing top batters, Akash Laishram (25), Ingobi (17), Rohit Laishram (10) and Laishram Nirash (13 not out) kept the scoreboard ticking before their collapse at 216.
Irom Sunny (2/40) and Niketan Maisnam (2/34) finished with two wicket hauls as other five bowlers ended up with a wicket each.
In reply, YPHU were left to languish from the beginning and were reduced to 32 for 3 after 10.4 overs as Amrendra Prasad was trapped lbw by Akash Laishram for 3-ball duck, Irom Eshwor was run out by Bishorjit Mangang for 10 and Robinson Meitei Sandham was caught out by Saikhom Kaiku.
AKSDO's Ingobi then undone Birbal Irom (12) and Abdul Kaif (0) for the fourth and the fifth wicket both in the 1st and the third deliveries of the 12th over to leave YPHU struggling at 36 for 5.
As YPHU added 12 runs to their tally, Irom Sunny was run out before Saikhom Kaiku swept three wickets in quick succession including highest run getter Tontomba Loktongbam for 31 runs to give AKSDO complete control over the game and finished with the best bowling figures of 3/15 in 5 overs.
Roshan Laishram then removed Moiranthem Thomas for 6 to wrap up YPHU's innings at 83.
Chinglensana of AKSDO who scored a half century was adjudged man of the match.
KCDO, Kongpal will play YWC-Patsoi in the next match tomorrow.