More teeth given to ST demand for Meiteis 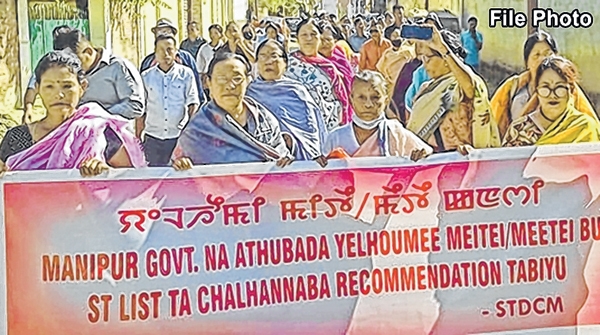 By Our Staff Reporter
IMPHAL, Jan 2 : The People’s Action for New Development Steps (PANDS) has endorsed the demand of Scheduled Tribe status for Meitei/Meetei.
According to a statement released by its secretary L Munindro Singh today, PANDS said it has formed a Joint Coordination Committee to oversee and work towards achieving Meitei/Meetei’s demand for ST status.
The Joint Coordination Committee was formed by an Adhoc Committee which was constituted during a meeting of the PANDS at the residence of L Munindro at Thangmeiband on January 1.
Significantly, the Scheduled Tribe Demand Committee of Manipur (STDCM) has been spearheading the movement for demand of ST status to Meitei/Meetei holding a series of democratic agitations across Manipur for more than 10 years.
Subsequently, many civil society organisations and elected Members of Legislative Assembly have come out in support of the demand in recent months.
STDCM and many others have been asserting that the inclusion of the Meitei/Meetei in the list of the Scheduled Tribes is the only way to safeguard the indigenous community Constitutionally.
They have been asserting that the Meitei/Meetei, without Constitutional safeguard, would soon become a minority in their own State and face possible extinction due to uncontrolled and illegal influx of migrants. They have also been arguing that the people of the community, without the ST status, are being confined only in the small area of the valley. When other communities including those already recognized as STs can buy land and settle in the valley area, the Meitei/Meetei on the other hand are not allowed to buy land or settle in the areas beyond the valley, designated as tribal areas.
Meanwhile, when the STDCM has been demanding the State Government to send specific recommendations and all records/data sought by the Centre to consider Meitei/Meetei’s demand for ST status, recently, the World Meetei Council had claimed that the recommendation has already been sent to the Centre’s Ministry of Tribal Affairs, according to Chief Minister N Biren Singh.
The WMC had said that the Chief Minister, during a meeting in November, told its members that the recommendation sought by the Centre had already been sent. The WMC further quoted the Chief Minister saying that the “ball is in the court of the Centre”.