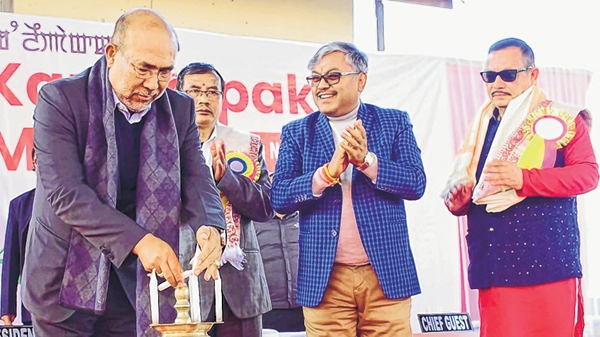 DIPR/OSR
Imphal, Jan 2: Chief Minister N Biren Singh has stated that the State Government has been working to make the State corruption free and sought the support of the people to achieve it.
The Chief Minister was addressing the 42nd foundation day celebration of the Kangleipakki Meira, an evening daily newspaper, held today at Pillow Library Ground, Mongshangei Mayai Leikai.
Continuing his speech, N Biren warned that strict and immediate action would be initiated against those who are involved in corrupt practices.
He said that the State Government always stands against anti-National, anti-State and anti-social elements, adding that any such act would not be tolerated.
In order to protect the State’s oneness, the Government sometimes makes compromises but there are areas where there is no room for compromise, Biren said.
There are instances of some people advocating anti-State ideas. Such activities cannot be tolerated, rather all should live as one, Biren said.
He categorically stated that the Government would never compromise on anti-State and anti-social activities.
Saying that mass destruction of poppy plantations has been carried out under the War on Drugs campaign, he urged all the authorities concerned to take up cases related to illegal drugs seriously.
The Chief Minister stated that earlier narcotic drugs were smuggled from outside the State but today drug manufacturing units are being established in the State thereby posing a serious challenge to the State’s future.
As a result of continuous clearing of forest areas to make space for poppy plantation, very few trees can be seen in many hill ranges, he said.
He then underscored the growing need for CSOs, Meira Paibis and other women activists to launch a massive movement against drug dealers and the overall drug menace.
The Chief Minister went on to claim that the mindset of people who had earlier carried out poppy plantations has changed, adding that the area of land where mass plantation of poppy was carried out is now reduced to around 1,100 acres from 7,600 acres.
Alternative crops were provided to the poppy planters for earning their livelihood, he added. He also asked the civil society organizations to visit hill areas and interact with poppy planters, making them aware of the harmful impacts of poppy cultivation.
He further informed that villages where poppy plantation had been substituted with alternative plantation will be rewarded by Union Home Minister Amit Shah during his visit to the State this month. He maintained that the State Government has been putting in every effort to bring a systematic change in the State.
Expressing happiness on certain constructive comments received from the people on various development works taken up in the State, he gave credit for all development to people’s support and cooperation. He also mentioned that certain circumstances arose where the Government had to take actions, considering betterment of the State.
Saying that the fertility  of the indigenous people of Manipur has declined to just 1.7 per cent, Biren appealed to all senior citizens and local organisations to ponder over the root causes of this sharp drop in the fertility rate.
The problem of immigration of non-local people will become a very serious issue after 10/20 years if some tangible actions are not taken up urgently, said the Chief Minister.
Saying that the Government has been working hard to address the issue, the Chief Minister called upon the people to contribute to the Government’s efforts.
The media fraternity may exercise the right to freedom of press and freedom of speech and analyse all social issues and write on people’s rights.
But they should not make an issue out of non-issues nor should they target private matters, Biren said.
During the programme, the Chief Minister also presented the Kangleipakki Meira Award, 2023 to journalists.
Best Female Journalist was presented to Phurailatpam Keni Devi (Imphal Free Press), Best Male Journalist (Print) to Thongam Premchand Singh (Senior Reporter, Poknapham), Best Male Journalist (Electronics) to Urikhinbam Indra Singh (Reporter, ISTV), Best Hawker (Kangleipakki Meira) to Wahengbam Inaocha Singh and Best Male Appreciated IPR Award to Sorokhaibam Prasenjit Singh. The Chief Minister also presented Lifetime Achievement Awards to senior journalists and other renowned personalities.
Works Minister Govindas Konthoujam, MLA of Patsoi AC Sapam Kunjakeshore, Editor-in-Chief, Kangleipakki Meira Wangkhemcha Shamjai, journalists and many renowned personalities attended the programme, among others.
Later, the Chief Minister visited Marjing Polo Complex and inspected the construction of Sagol Kangjei statue, which will be inaugurated by Union Home Minister Amit Shah on January 6.