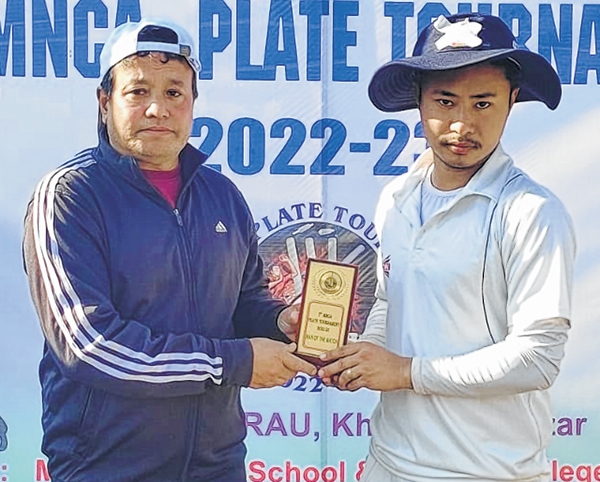 By Our Staff Reporter
IMPHAL, Jan 3 : Laikhuram Jagat  shone with both the bat and ball to give YWC-Patsoi a convincing 9-wicket win over KCDO-Kongpal in a Group B match of the ongoing MNCA Plate Tournament at Model Hr Secondary and Oriental College ground today.
Opting to bat first KCDO came out confidently but were bundled out for 141 in 23.1 overs as YWC-P bowling trio- Daniel Lhunminthang (2/24 in 5 overs), Thoungamba M (3/30 in 6.1 overs) and Laikhuram Jagat (4/30 in 6 overs) were in their best forms today.
YWC-P then rode on an unbeaten 107-run second wicket stand between Laikhuram Jagat (43 off 83 balls) and Ashishkumar (35 off 63 balls) to secure the target in 26.1 overs.
For KCDO, Md Ajizur Rahman (28) was the highest run getter after Daniel removed Rosebel Sapam (2) for the first wicket and Thoungamba M bowled out Bikram Phamdom for 18 and trapped Md Umar Sheikh for 11 for the second and third wickets.
Thoungamba went on to remove Prakash Nandeibam (4) for the fifth wicket as Laikhuram Jagat who opened his account by bowling out Netajit Konsam for 11 swept three more wickets including Ajizur Rahman and second highest run getter Tarif Khan for 22 to trigger the KCDO collapse at 141 runs.
In the chase, YWC were at 35 in 7 overs when Grison was caught behind by KCDO wicket keeper Rosebel Sapam for 13 off a Netajit Konsam delivery but Laikhuram Jagat and Ashiskumar Singh Wakongthem put together a good show by playing cautiously to steer their team to a comfortable win with 9 wickets left to spare.
Laikhuram Jagat was eventually adjudged man of the match.
YAC-Yaiskul will play THAU-Thangmeiband in the next match tomorrow.