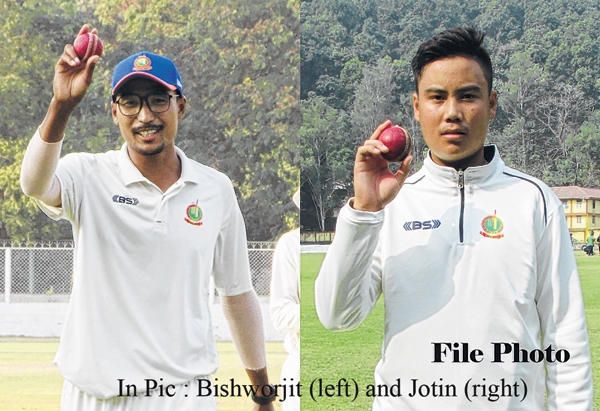 By Our Staff Reporter
IMPHAL, Jan 3 : Manipur's bowlers continued to excel at Ranji Trophy this season as they bowled out Mizoram for a first innings total of just 104 runs to put Manipur on the front foot in their fourth match at Narendra Modi Stadium Ground 'A', Motera in Gujarat.
Manipur won the toss and chose to field first. Pace duo - Jotin Pheiroijam (4/35 in 11 overs) and Bishorjit Konthoujam (3/21 in 8 overs) ran riot to make short work of Mizoram within 35.4 overs. Continuing the day, Manipur were 117 for 4 in 52 overs and took a slender 13 run lead at Stumps on Day 1.
In the Mizoram's innings, pacer Jotin Pheiroijam inflicted early damage by trapping Hruaia (6) for the first wicket and Taruwar Kohli for 4-ball duck in the second wicket to make it 2/18 in 9.3 overs.
Mizoram further slumped to 3 for 28 in 12.4 overs as Thanzuala hit Bishworjit for a boundary but the ball went to the waiting hands of Manipur skipper Langlonyamba Meitankeisangbam.
Shreevats Goswami of Mizoram who came in third stood firm to his ground but saw Manipur's Bishworjit remove Thankhuma (1) and Vikash Kmr (0) for the fourth and the fifth wickets, both on lbw to reduce Mizoram to 42 for 5 in 18.6 overs.
The next over saw Mizoram losing Jehu Anderson for 5-ball duck for the six wicket before Jotin Pheiroijam bounced back to scalp wickets of Avinash Yadav (23) and Naveen on golden duck and restrict Mizoram to 81 for 8 in the fifth and the sixth deliveries of the 28th over.
Left arm pacer RK Rex also joined the party and trapped Dika Ralte lbw for 8-ball duck before L Kishan Singha, who starred in previous game win against Arunachal Pradesh, got rid of Shreevats Goswami for 58 and wrapped up Mizoram's innings in 35.4 overs.
In Manipur's innings, Naveen removed Rahaman for 7 in the fourth over before Langlonyamba M and Ronald M gathered a significant 62 run partnership for the second wicket.
Dika Ralte then dismissed Langlonyamba for 39 for the second wicket before Taruwar Kohli claimed wickets of Ronald M (30) and Johnson (0) to reduce Manipur to 88 for 4 in 39.2 overs.
P Prafullomani (25*) and Priyojit K (12*) then took charge of the innings and took Manipur past Mizoram before the day was called.