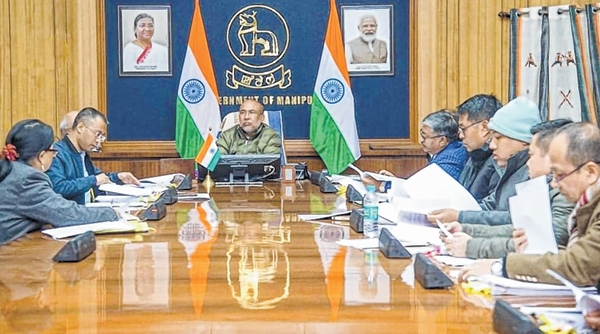 By Our Staff Reporter
IMPHAL, Jan 3 : The Cabinet has resolved to hold Urban Local Bodies (ULBs) and Panchayati Raj Institutions (PRIs) elections in between March and first week of April this year.
The resolution was taken during a Cabinet meeting convened last night at the Cabinet Hall of the CM's Secretariat. During the meeting presided by Chief Minister N Biren Singh , discussions were held on over 40 agendas.
Addressing a press briefing at his residence at Lamphelpat today, Health and IPR Minister Dr Sapam Ranjan conveyed that the Cabinet has agreed to hold ULBs and PRIs elections in the first week of March and April respectively.
Saying that the tentative schedule of the elections will be announced shortly, the Minister maintained that the Deputy Commissioners concerned will supervise the functioning of PRIs until the elections are held.
Further stating the Cabinet also held a discussion on ADC elections during the meeting , Dr Ranjan informed that the ADC elections would be held after the completion of delimitation exercise.
According to Dr Ranjan, the ADC is unlikely to be held till April.
The IPR Minister went on to state that the Cabinet has resolved to commence the third  session of 12th Manipur Legislative Assembly from February 2 onwards.
The Business Advisory Committee of the Assembly will finalise other details such as the duration of the sitting, he said and added that the Cabinet has decided to hire a number staff of Government departments on a contractual basis and recruitment of 62 posts of MACS and 97 posts of State of the Art Paediatric Care Centre, RIMS during last night's meeting.
The Cabinet further agreed to recruit 90 SOs of PWD, 18 posts of Relief and Disaster Management, 91 SOs (Grade-I) and 7 SOs (Grade-II) of PHED, 50 Multi Tasking Staff (MTS) and 10 GAD drivers (daily wages), Dr Ranjan continued and maintained that the meeting further gave a green signal to recruit 31 posts in Forensic Science Laboratory through MPSC  and another 36 Grade B, C and D posts of the laboratory.
The Health Minister also informed that a viva voce will now be included in the recruitment drives of Head Constables, Constables and followers.
Saying that the Cabinet has approved the Draft Manipur Start-up 2.0 Policy 2022, the IPR Minister stated that the meeting agreed to introduce Manipur Entrepreneurship Support Scheme and give 30 per cent subsidy to entrepreneurs as assistance.
Continuing that the meeting decided to lease out a land to Chinmaya Trust to open a  girls-only Sainik School in Bishnupur and lease out another acre of land at Lamphelpat to set up an Imphal Sub Zonal office of Enforcement Directorate, the Minister stated that  they have decided to hire two Principals of Government colleges through MPSC and establish a Cyber Engineering Cell.
The Cabinet has also given the go ahead signal to extend the service tenure of Joint Secretary of Revenue Y Rajen, Joint Secretary (Home) and Protocol Officer Rahamuddin Choudhury, CE of Manipur Police Housing Corporation S Romendra, CE of MOBEDS S Dhanabir and CE of Power H Santikumar by another year.
The Minister further stated that the Cabinet has agreed to give compassionate appointment to Shyam Kishore Khaidem, s/o former Khalashi of Forest Environment and Climate Change Department Late Khaidem Ibocha.