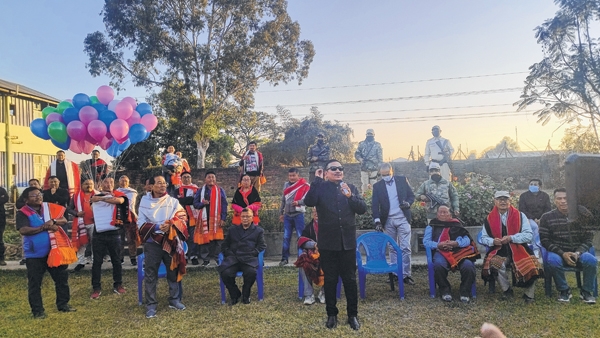 By Our Staff Reporter
IMPHAL, Jan 4: Patsoi AC MLA Sapam Kunjakeswor (Keba) has called for concerted efforts to achieve the vision of a 'Green and Drug free Sangaiprou'.
He made the above appeal while speaking at the Gaan Ngai celebration held at Sangaiprou Kabui Khul today
The celebration commenced with the release of balloons carrying Gaan-Ngai best wishes.
The MLA also appealed to the gathering to plant various saplings of fruit bearing trees at the road side for a greener Sangaiprou. He further assured to extend best possible help from his end towards the cause.
Highlighting the need of a drug free and healthy society to create a conducive environment for the youths, he called for collective and dedicated efforts to actualise the said vision.
The MLA also expressed contentment over uniform development in both the hills and valley region under the able leadership of Chief Minister N Biren Singh.
S Keba further stressed on the need of putting in cohesive efforts for a progressive Manipur setting aside all forms of differences.
He went on to express his wish to construct a public stage in the ground of Sangaiprou Kabui Khul based on traditional and modern infrastructure
The hospitable and disciplined nature of the youths of the Kabui Khul was also lauded by the MLA.
Today's Gaan-Ngai celebration witnessed enthusiastic participation by the residents of the Sangaiprou Kabui Khul.