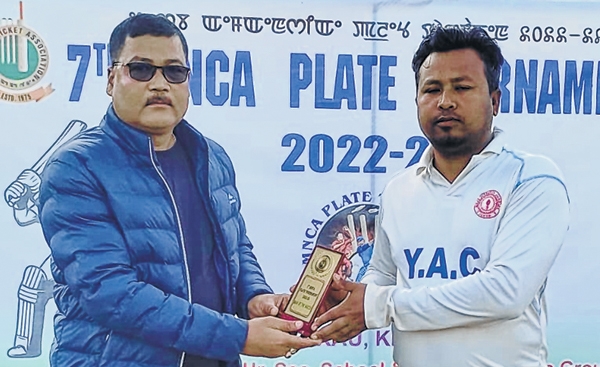 By Our Staff Reporter
IMPHAL, Jan 4 : YAC-Yaiskul cruised to second straight Group A victory in 7th MNCA Plate Group Tournament with a 2- wicket win over THAU-Thangmeiband today at Model Hr Secondary School and Oriental College playground.
THAU won the toss and opted to bat first but were bundled out for 150 runs in 38.4 overs by YAC who reached the target in 33.5 overs with two wickets left in the hand.
For THAU, Sagolshem Santoshkumar starred with the bat scoring highest 66 runs off 100 deliveries courtesy 8 fours and 1 six but saw his partners depart with paltry figures  before they were bowled out for 150 runs.
Salam Raju was the pick of the YAC bowlers as he led the attack and returned with best figures of 4/21 in 5 overs and Oinam Kiran scalped three including Santoshkumar and the last wicket for 32 runs in 7.4 overs.
Ajanta Luwang and Krishnananda Khwairakpam of YAC also managed a wicket each in this innings.
In reply, YAC faced stiff opposition from THAU bowlers and lost wickets in regular intervals but concerted efforts from batters and 31 runs extra spilled by THAU bowlers proved helpful and eventually reached the target in 33.5 overs for the second win.
Krishnananda Khwairak-pam (24 off 21 balls) was the highest run getter for YAC followed by Joychandra Singh Ngangom (22) and Pukhrambam Priyokumar (22).
The innings saw THAU's Malesh Kumar Ngangom (2/21) and Khundrakpam Aden (2/34) picking two wickets each as N Surash, Yungkham Ortega and Khumukcham Romesh claimed a wicket each in a lost cause.
Salam Raju of YAC who scored 10 runs in the chase after enjoying a four wicket haul was eventually adjudged man of the match.
IBSA-Yumnam Leikai will play OSCAR-Paona Bazar in a Group B league match tomorrow.