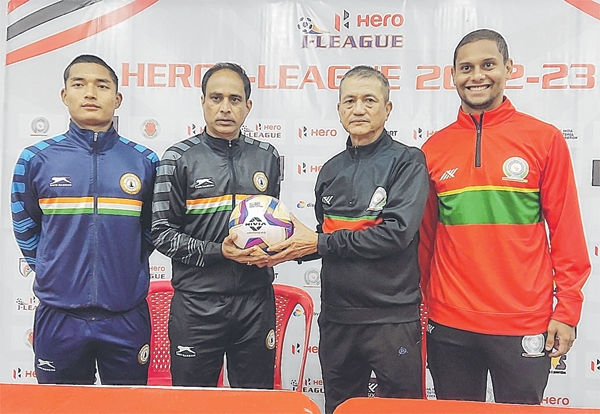 IMPHAL, Jan 4
In the first Hero I-League game of the new year, TRAU FC will go up against Sudeva Delhi at the Khuman Lampak Stadium in Imphal on Thursday (January 5, 2023), with the kick-off scheduled for 4:30 PM IST.
TRAU had mixed results in their opening nine games of the season, with four wins and losses each, and a draw. All of their victories have come at home, and they will hoping to extend that streak against bottom side Sudeva Delhi.
In their last outing, TRAU were handed a 1-6 drubbing at the hands of Churchill Brothers, which caused head coach L Nandakumar Singh a bit of a headache during the break.
“After losing against Churchill, I had to think a lot about our remaining matches. All my players have recharged mentally and physically over the break and are ready to go again,” said Nandakumar.
Brazilian midfielder Gerson Fraga Vieira, who has been instrumental for TRAU this season, is looking forward to a win for the home fans tomorrow. “I am expecting a good game and a good performance, not just from me but from my teammates as well. I truly believe we can get a positive result and show our fans good football tomorrow,” said Gerson.
TRAU and Sudeva Delhi faced each other twice last season, with the first game ending in a goalless stalemate, while the capital side emerged 1-0 victorious in the relegation stage, thanks to Shubho Paul’s winning goal.
Sudeva Delhi, led by new head coach Sankarlal Chakraborty, snapped their seven-game losing streak with a 1-1 draw against Mohammedan Sporting in the last match before the break.
In the pre-match press conference, Chakraborty said, “We have prepared well during the break. It’s been only three weeks since I joined Sudeva, and we are trying our best. We want to do better than how we have so far.”
After putting in a tiring shift against Mohammedan in their last game, Chakraborty expects better days ahead for the team from the capital. “The boys have the quality. They just need more support and confidence. We are currently last on the table and our first point of the season gave us some confidence. Now, there’s belief in the dressing room that we can achieve great heights.”
Hailing from Manipur, Sudeva Delhi midfielder, Lunkim Khongsai talked about the football heritage of his state. “Manipur is the land of football and I feel proud to be from here. The atmosphere in the dressing room has been good with our new coach. We are preparing well for the game tomorrow and will give our best,” said the 22-year-old.
The match between TRAU FC and Sudeva Delhi will be broadcast live on Eurosport and Doordarshan Sports and streamed live on the Discovery Plus OTT platform.
AIFF Media Team