Over 51,000 Kgs of fish sold at Emoinu Fish Festival 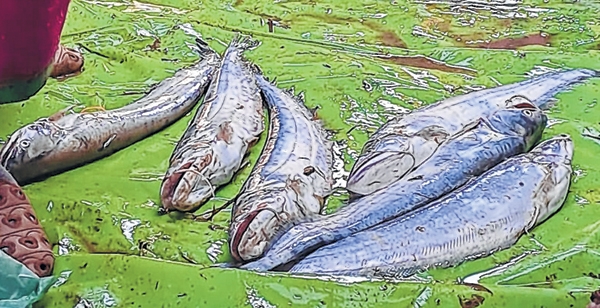 Imphal, Jan 4 (DIPR)
The first Emoinu Fish Festival, 2023 organized by the Department of Fishery at Hapta Kangjeibung on the day of Emoinu Festival registered sale of 51,362 Kgs of different species of fish including 2600 kgs of home grown Meitei Sareng.
Fish farmers of Bishnupur district contributed the highest production with 17,709 Kgs followed by Imphal West district with 14,218 Kgs and Thoubal district with 9009 Kgs.
A significant outcome of Emoinu Fish Festival, 2023 is that the total proceeds accrued from the sale of fish accounted for Rs 1.30 crore which is a spectacular achievement for the fish farmers and Fishery Department.
Silver carp which is not so popular in other festivities made a strong presence in the fish mela and a total of 18,890 Kgs were sold like hot cake.
10,633 Kgs of grass carp and 8073 Kgs of catla, rohu and mrigal which is commonly known as Indian Major Carp were sold.
Among the indigenous fish varieties, 3360 Kgs of Ngaton, 686 Kgs of Pengba and 246 Kgs of Khabak were sold.
The stalls where Meitei Sareng was made available to the public consequent upon the initiative of the Chief Minister and the State Fisheries Department were thronged by thousands of consumers making a beeline for a first glance and grab an opportunity to purchase for offering to the goddess Emoinu.
The hefty price fixed by the State Fisheries Department didn’t hamper the spirit of the enthusiastic consumers.
Unlike the annual fish festivals held on the eve of Ningol Chakkouba festival in the past, this year’s Emoinu Fish Festival witnessed departmental stalls of Agriculture, Horticulture, MOMA, Forest and various start-ups catering to agro and allied products like organic black rice, ginger, turmeric, fresh seasonal vegetables, value added local fruits, beverages, etc which provided a shopping spree and extravaganza to the visitors.
The total sale proceeds recorded by the Fishery Department and start-up stalls at Hapta Kangjeibung stood at around Rs 3 lakh.