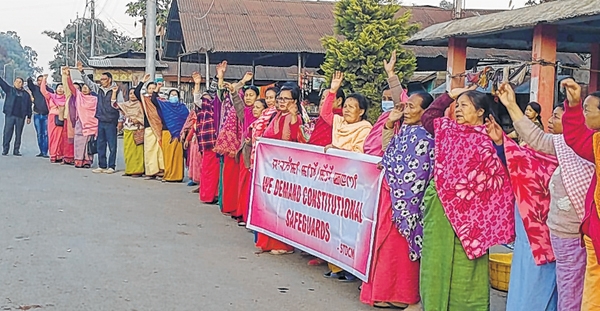 By Our Staff Reporter
IMPHAL, Jan 5: A large number of womenfolk came out to Tiddim Road and formed a human chain at Oinam Keithel in Bishnupur district this afternoon, urging the State Government to send the requisite recommendation for enlistment of Meitei/Meetei in the Scheduled Tribe category under the Constitution of India.
Meanwhile, the Scheduled Tribe Demand Committee of Manipur (STDCM) has sought an appointment with Union Home Minister Amit regarding the demand for inclusion of Meitei/Meetei in the ST list.
The STDCM today sent a letter to the Chief Secretary asking the latter to obtain permission of the Union Home Minister for a brief appointment so as to enable them submit a representation.
The protest demonstration staged at Oinam Keithel was jointly organised by Oinam Apunba Nupi Lup, woman vendors of Oinam Keithel and STDCM Bishnupur district branch under the aegis of STDCM.
The human chain raised many slogans against the State Government’s failure to send necessary recommendations and documents to the Centre for enlistment of Meitei/Meetei in the ST category.
One of the protesters said that securing ST status is the only option available to the Meitei community for protecting themselves.
Pointing out that Meitei community constitutes a minisucle minority in the vast sea of Indian communities, the woman underscored the growing need for securing ST status before Manipur finds its place in the country’s railway map.
She then urged the State Government to send the requisite recommendation and necessary documents to the Central Government at the earliest for enlistment of Meitei/Meetei in the ST category.
She warned that the people of Oinam and Bishnupur district would be constrained to launch different modes of agitation in association with the STDCM  if the State Government fails to act in line with the people’s aspiration.