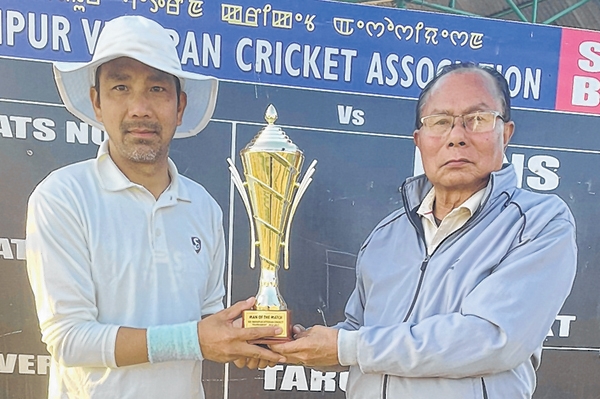 By Our Staff Reporter
IMPHAL, Jan 5 : KCC-Kongbam overcame CHAMP-Khagempalli by 6 runs in a keenly contested Group A match of the ongoing 19th MVCA Veteran Cricket Tournament at Luker ground, Imphal West.
KCC posted 136 runs for 10 in 26.4 overs after electing to bat first and held CHAMP to 130 for 6 in 30 overs to seal the narrow victory.
In KCC's innings N Devakanta (25), RK Mahendra (24), S Robertson (22) and S Sanjoy (19*) made significant contributions before they collapse at 136 as CHAMP's T Surjit (4/13) and U Robinson (4/35) claiming four wickets each.
In reply, CHAMP's opening duo fell cheaply and were under pressure throughout the innings as KCC bowlers were too stingy to spare runs.
Despite T Surjit's unbeaten 26 and significant contributions from U Robinson (22), Narjit (35), CHAMP were restricted to 130 for 6 in 30 overs.
N Devkanta and Janab picked up 2 wickets each in this innings as Robertson and Leishemba claimed a wicket each.
N Devkanta who added 25 runs and managed two wickets was named man of the match.
CYCLONE-Thangmeiband will play YPHU -Lalambung in a Group B match tomorrow.