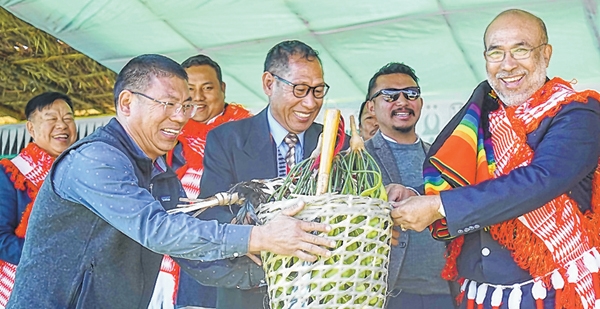 IMPHAL, Jan 5 : To bring about unity and equal development, people should forgive and forget historical mistakes, said Chief Minister N Biren Singh while attending the Poumai Thounii 2023 at Phaibung Khullen, Senapati district today.
As chief guest, the Chief Minister inaugurated the Poumai Thounii 2023, being celebrated under the theme ‘Sustaining Culture’.
The Poumai Thounii 2023 will conclude tomorrow.
On arrival at the venue, Chief Minister N Biren Singh and other guests were accorded a warm welcome by the public with traditional trumpets blown. As part of the celebration, N Biren Singh unveiled a monolith of the village.
“We are one. Let us forgive and forget our historical mistakes,” the Chief Minister said, expressing the need to bring about unity and equal development in the State.
Seeking people’s support and cooperation in the effort to unite and promote the idea of oneness, N Biren Singh said his relation with the Poumai community dates back to his early days as a player of NEROCA.
He said the Poumai community is disciplined and hardworking and they keep their traditional values intact.
Stating that traditional values and culture should be preserved and promoted, he mentioned the significance of the Makhel Heritage Park culturally and historically.
“We were set apart due to lack of development, interaction and communication in the past,” the Chief Minister said, adding there is a need for more visits and interactions of the people across the State.
The State Government introduced the Go to Hills and the Go to Village missions to reach out to the people and bring development to their doorsteps. Over the past few years, Senapati district has witnessed massive developmental changes, he said highlighting the construction of Ima Market, installation of open gyms, trauma centres, blood bank, oxygen plant etc.
The Chief Minister also highlighted some projects being taken up like the indigenous sports complex, amusement park, astro turf installation at the district headquarters.
Further talking about the Government's War on Drugs campaign, N Biren thanked the Poumai community for their positive support and response.
He also mentioned that it was encouraging to learn that people seem to be emphasizing more on terrace cultivation than jhum cultivation and added that the Government is also in the process of encouraging terrace cultivation.
Speaking about a memorandum he received, the Chief Minister said that he was quite impressed that the representation sought special emphasis on natural and organic farming.  He assured the people that he would look into the memorandum.
Poumai Naga Union president D Dailord Pao said that the magnitude of the people gathered to celebrate together the traditional Poumai Thounii, 2023 was a manifestation of oneness, and growing together as one.
Thounii in the past was celebrated by the people of the Poumai community in their respective areas and villages to mark the dawn of a New Year.
The celebration of the grand festival is to sustain the culture, tradition and to promote the values of togetherness and maintain cohesiveness. The celebration brings the people of the community together, D Dailord Pao said.
The function was attended by Cabinet Ministers Govindas Konthoujam, Letpao Haokip, L Susindro Meitei, MP Dr Lorho S Pfoze, MLA J Kumo Sha, Losii Dikho and Naga People’s Organization president Solomon Arow among others.
Folk songs, music, cultural dances, fire making, performances by Phaibung Union  and release of a souvenir marked the day.
Several stalls were opened exhibiting local products of villages including Purul Rosofii, Chingmai Khunou, Purul Akutpa, Lakhamai, Laii, Koide, Thingba Khullen, Maiba, Siimai, Ngari Raiduloumai, Kodom Khullen, Ngari Khullen, Khamsom, Phuba, Taiwan Songdo and Phaibung Khullen.