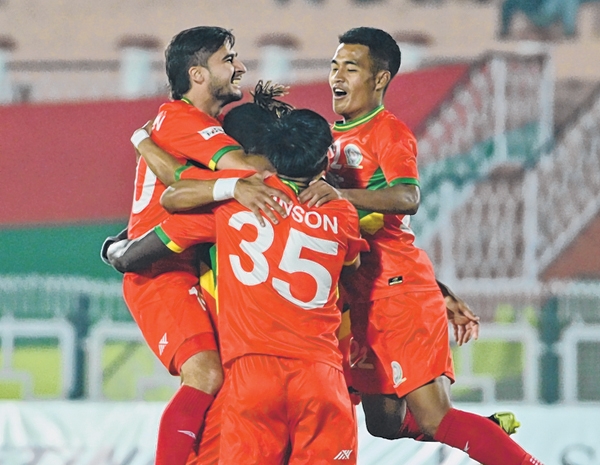 IMPHAL, Jan 5
The New Year did not bring a change of fortune for Sudeva Delhi FC but Tiddim Road Athletic Union (TRAU) jumped from sixth to fourth on the Hero I-League table with a convincing win here at Khuman Lampak Stadium  today with 16 points to their name, as many as that of Real Kashmir, TRAU remain behind the latter on the points table by dint of the head-to-head record between the two sides.
This was TRAU’s fifth victory at home in as many matches and except for a few moments, they always looked in control. They got more corners and many more attempts at goal than their opponents and had more possession. Goalkeeper Bishorjit Singh took care of the few openings created by Sudeva Delhi.
The hero for TRAU, however, was Ghanaian forward Nana Poku. His defence-splitting pass to the left for Bikash Singh gave the home team their opening goal in the 39th minute. Poku himself made it 2-0 in the 54th minute when he got the ball inside the six-yard box, turned smoothly and let out a right-footer that took a slight deflection from a Sudeva defender before it went in.
Poku could have added to his tally in the stoppage time when he had only the goalkeeper to beat. But Sachin Jha left the line to make an incredible block, saving Sankarlal Chakraborty’s boys from further blushes. Even in the 86th minute, TRAU right-back Naresh Singh went straight up to the Sudeva goal on the overlap and cut back for Poku, but he could not get enough on the ball to score his second and the team’s third.
Sudeva, sitting at the bottom of the table, would find it difficult to take away anything positive from this tie. Perhaps the only bright spot was their Nigerian midfielder Akeem Aboiye. It was he who created the first chance of the match when he unleashed a powerful left-footer at the TRAU goal which demanded Bishorjit to do his best but Ishan Dey could have scored from the ricochet. Four minutes later, Abioye had another attempt on target. Even the best chance for Sudeva was created by Abioye at the fag end of the match. His precise free-kick in the 81st minute found an unmarked Karthik Panicker in front of the TRAU goal. But the substitute who had just come in, headed it wide.
Apart from the win that has put TRAU in the fourth position on the points table, head coach L Nandakumar Singh would also be impressed by the clean slate because it is only their third this season. His defence had a good day. Not just goalkeeper Bishorjit, even Manash Protim Gogoi had a great day in office.
Sudeva stay rock bottom with just one point garnered from their last match of 2022 against Mohammedan Sporting. That would have given them hope for a better show this year, but it was crushed this evening. They could not capitalise on the few chances they created and even Chakraborty’s triple change at the 60th minute did not produce any desirable result.
Substitute Biaktea went really close to scoring in the 82nd minute when Salam Johnson Singh’s tackle inside the TRAU box averted the danger. Biaktea thought it was a penalty, but referee Mithun Kumar Kundu thought otherwise.
AIFF Media Team